It's been a very mixed start to the year, musically. I've seen some fantastic gigs so far - The Meanies, The Drones, Spiderbait, Camera Obscura and The Decemberists - but sadly several of those gigs only came about because Victoria's liquor licensing laws now penalise as 'high risk' any venue trading until 3am, regardless of whether its patrons have a history of violence or not.

Thus, last week long-running Melbourne live music venue The Tote was forced to close its doors - going out with one hell of a bang - because running the pub was no longer viable in light of the increased liquor licensing and security costs which came with its farcical 'high risk' status.

I've been drinking at The Tote since 1990, and not once in 20 years have I ever seen a fight there. I have, however, seen some truly kick-arse bands; several of whom performed at The Tote last Monday, its closing night.

The Meanies played a brilliant, blinding set that made me feel 15 years younger; Spiderbait stepped in as a two piece at the last minute, replacing The Cosmic Psychos; and Joel Silbersher (formerly of precocious young punks GOD) joined The Drones to rip out a blistering version of Australian underground rock classic 'My Pal' as the last song of the night.

The sad, frustrating and infuriating thing about all this is that The Tote should never had had to close. The Victorian state government has rushed a flawed piece of legislation into place in order to be seen to be doing something about alcohol-related violence - just as they rushed a fatally flawed '2am lockout' policy into ill-fated action in 2008.

As I wrote in a recent article for Arts Hub:

The recent changes to the liquor licensing structure are based on a July 2009 report prepared by the Allen Consulting Group called Alcohol-related harm and the operation of licensed premises, which is freely available online as a PDF.

The report identifies the following risk factors that are likely to cause alcohol-related harm at licensed premises:

The study’s great flaw, however – one that is repeatedly acknowledged in the report – is that its data is incomplete, specifically where different types of venues are concerned.

In compiling the study, its author/s were not able to differentiate in a substantial way between any one Victorian venue providing music entertainment (either live or recorded) and another:

Page 33 of the report reads, in part:

“It is understood that most gaming, adult entertainment and karaoke venues are identified in the data set, and therefore adequately captured by the relevant venue type categories. However, many live and recorded entertainment venues in the data are not captured by the relevant venue type category. Given this fact, results for the live and/or recorded music category should be interpreted with caution.”

Elsewhere, on page 45, the report states:

“Given the data limitations, the risk associated with live and recorded entertainment is assumed to be captured by the late opening hours risk factor for the remainder of this analysis.”

In other words, the report only assumes – it definitely does not prove – that live music venues possess the same ‘high risk’ as other late night venues studied by the report such as bars and gaming venues.

(And I should thank David Blumenstein for pointing me in the direction of this section of the report!)

The only good news from all this drama and government-caused stupidity is that the huge public outcry over the closure of The Tote - which included over 2000 protesting in the street on its second-last day of trading, and hundreds of phone calls and emails to ALP politicians in once-safe but now marginal inner city seats - is that the government are panicking, and trying to rectify the situation. That it should never have happened in the first place, however, I'm sure will be remembered come the state election in November this year...

And on a brighter note...

As I said, The Tote aside, I've seen some fantastic gigs over the last couple of weeks. I'll cheat and include a great set by The Veils at The Toff in Town late last year, since I've been rather tardy in updating this blog over the last few months.

More recently, on Saturday night I caught Glasgow's Camera Obscura at The Corner Hotel, and then last night I sung and danced and swayed along to the piratical indie folk-rock of Portland's The Decemberists at Billboard. Great gigs all. Here's a taste of what you missed thanks to the magic of You Tube. 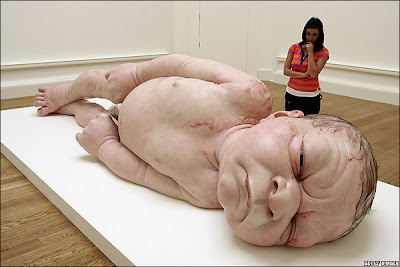 Oh dear. I've been, not exactly avoiding blogging lately, but it does feel a bit like work sometimes, given that I spend half my days sitting in front of the computer writing about arts-related subjects. So, consider this a catch-up post to cover some of what I've been doing and thinking about since the start of the new year.

Hopefully I'll post more regularly in the coming months. I certainly don't intend to kill this blog off - it's too much fun, especially when I read back on what I was doing a few years ago (A can of coke and a line of speed for breakfast? Really? What was I thinking?).

Anyway, here's a brief update on what I've been seeing, contemplating and doing in the first few weeks of this year.

I caught a preview of The Road, the new film by Australian director John Hillcoat, a couple of weeks ago, and was very impressed. There's a full review over at Arts Hub, so allow me to quote myself for a moment:

'A scene in which the Man is poised to kill the Boy before turning their gun upon himself perfectly captures the drama, terror and tenderness of these character’s desperate, scrabbling lives. But rather than putting his audience through the emotional wringer, Hillcoat has crafted a stark and subdued film which relies on suggestion rather than extravagant special effects to present its almost minimalist vision of the end of the world.'

I liked the film a lot. It opens nationally next week, Thurs Jan 28.

Over at Citysearch I've written a review of the new MTC production, The Drowsy Chaperone, which I enjoyed much more than I expected to:

'As with many musicals, the actual plot is slight - Broadway starlet Janet Van De Graaff (Christie Whelan) wants to quit show business and marry Robert Martin (Alex Rathgeber), while her producer Feldzieg (Shane Jacobson), urged on by a pair of mobsters disguised as pun-slinging pastry chefs (Grant Piro and Karlis Zaid), tries to sabotage proceedings. The real fun lies in the framing of this deliberately slight story, with Rush's obsessive show queen constantly interrupting, pausing and annotating the production in order to pass judgement on its racial stereotyping, clichés and less successful moments.'

I've also previewed the hard-hitting film Precious, which I described on Facebook as 'soul-scouring' (look for a detailed review coming soon) and earlier in the month I had the pleasure of attending the opening night of Daniel Kitson's wonderful 66a Church Road at The Arts Centre a wry, sad, humourous and wonderful exploration of nostalgia, memory and the concept of home.

On Thursday night, before seeing The Drowsy Chaperone, I also had the pleasure of attending the opening night of the new Ron Muek exhibition at the National Gallery of Victoria in St Kilda Road. Wow. What awe-inspiring, beautiful, grotesque and wonderful work. These incredibly realistic larger-than-life, and small-than-life sized sculptures (one of which is pictured above) are quite simply amazing, and I highly recommend you check the show out.

Let's see, what else? Well, I cried during The End of Time Part Two, David Tennant and Russell T. Davies' swansong to Doctor Who.

I mean, I love the show; and I'm a big sook who cries at the drop of a hat, so it really was to be expected that I'd be blubbering over the climax to the Tennant era. But yeah, it really got to me. Especially the Tenth Doctor's final line before he regenerated into Matt Smith, the Eleventh Doctor (who I am very much looking forward to seeing in action. Geronimo!).

Should I talk about Christmas? It was very quiet - after a three hour broadcast on 3RRR between 9am - midday, I came home and spent the day with a very dear friend, The Irishman, who was back visiting Australia for six weeks, and who has since returned home.

Having worked through the whole unrequited love thing for The Irishman a few years ago, it was nice to just hang out as mates together, drink serious amounts of alcohol and eat lots of seafood on Christmas Day. No presents, no bullshit. No offence to my family, but it was actually one of the best Christmases I've had in years. Fun, relaxed, entertaining, zero stress and good company. What's not to like?

Well, now that I'm onto the personal stuff, I may as well as well contine in this vein for just a moment.

On the plus side, while 2009 was a pretty miserable year in a lot of ways (three friends died within a couple of months of each other) on a more positive note I finally managed to kick my speed habit of seven years last year - a very good thing, since at one point I was spending $300 dollars a week on amphetamines.

The flip side of that, however, is that since I'm now eating again, I've lost my speed-induced svelteness and have piled on the kilos over the last 12 months.

Part of this is due to the fact that I'm drinking far too much - probably about the same amount I was drinking while I was a speed freak, but back then I was barely eating and I was going for long walks in the middle of the night, since sleep was definitely not on the agenda. Now, post speed, the weight's caught up with me.

So, the ambition for 2010 is to lose weight by exercising more, eating more balanced meals and drinking much less. I'm seriously thinking of giving up the grog altogether, at least for a month or two. We'll see how I go. Addressing one vice per year seems like an achieveable goal to me. Would you agree?
Posted by richardwatts at 12:47 pm 2 comments: